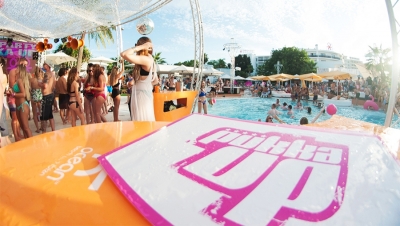 The Naughty Reunion places thousands of like minded ravers together for the last big session of the year. And for 2015, they have lined up more than 60 acts across separate arenas. DJ sets manned by some big artists stageshows from the biggest chart-climbers and the hottest breaking acts that you can say you saw first.

We are back for our second consecutive year to throw an epic pool party on the Friday afternoon for all those lucky revellers that added an extra night onto their ticket.

The pool party kicks off early afternoon and is the prefect cure for the antics of the night before. DJing will be Pukka Up Record Label Director, Mark Robinson to get people in the mood for the weekend ahead.

For those who chose to add an extra night onto their ticket you can also find us in Front Room the night before, with full Pukka Up production and playing the soundtrack to your summer.

We cant wait to team up with our partners Thomson Scene for their epic reunion party this November!

This Thursday 24th, Pukka Up will be heading back to Glasgow’s Sugar Cube, one of the Scottish city’s biggest nightclubs, to join up with the student night Rendez- Vous to host the Rendez- Zoo Project.

Think free glitter and body painting, those renowned Ibiza party vibes, and the finest in quality house music. This one’s gonna be huge.

Standard entry is £5 standard, £3 for students on the door, and will be absolutely free for the first 200 students to arrive! Doors open at 11pm. 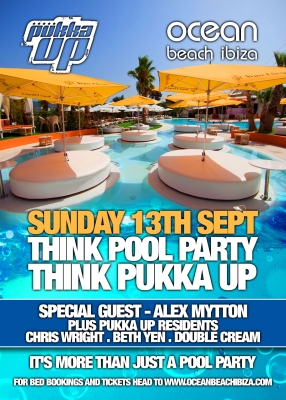 The world's biggest boat party, Pukka Up, takes over Ocean Beach Ibiza for a one- off, not to be missed event on Sunday 13th September!

Following the huge success of Pukka Up’s global event calendar in which boat, beach and pool parties have been held as far as Brazil and Australia, the two brands have been secretly planning a one off event to be held in September on the White Isle…

Think this…The hottest sounds of the summer brought to you by the world renowned Pukka Up residents and special guests. This day of ultimate opulence continues with tantalizing performances from the Pukka Up It Girls to ensure the party starts under the sun and sets under the stars.

Expect glamour, expect special guests and expect some surprises along the way as the two San Antonio titans team up for this one off special event!

To buy tickets and book your VIP beds click HERE

Don't hesitate- this will sell out!

…Its more than just a pool party x

THIS AUGUST BANK HOLIDAY, PUKKA UP HEADS TO BOGNOR, BRINGING A SLICE OF IBIZA BACK TO THE UK…

The newly restored William Hardwicke pub boasts a fantastic location right admist the sea- front action, and is well known for being the best of its kind in Bognor Regis. We couldn't think of a more perfect venue to host a decent summer bank holiday session.

Kicking off at 2pm, the event will then continue with 12 hours of non stop Balearic beats for those who are looking a party that will make this bank holiday's celebrations that little bit extra special.

Manning the decks from day to night will be two of Pukka Up's resident DJs, Mark Robinson and Kev Dobbs. These guys are certainly not strangers to seamlessly mixing house music's latest anthems in to some of its classics.

Joining them will be a live percussionist, as well as a roster of talent from local DJs.

Expect incredible production, amazing house music, and to get down Ibiza- style!

See you on the dance floor… x

COMING FOR YOU MANCHESTER! 27TH JUL

Summer is well and truly here, so this weekend we’ve got something to tempt you into a last minute holiday with our very own Mark Robinson heading up the floor for this party. As though it could even get any better, we’ve got some serious talent from our other favourites to complete the evening with the likes of Adam Guy, Rob Callaghan, Twinsound and Paul Barno joining us in Static. Think high-energy, think banging tunes and think party!

See you there Manchester!!! X

Exclusive Guest List for Pukka Up at McQueen Shoreditch

This August we return to one of our flagship London venues, McQueen in Shoreditch. Over recent years the lounge bar come nightclub has built an unrivalled reputation as one of the capital’s leading venues for fans of house music, located in everyone’s favourite London borough, Shoreditch.

click here to be added to it, and to make sure you don’t miss out on our biggest party in the UK’s capital this summer.

Summer Reunion Tickets £30 for One Week Only

Although the summer season is only just getting in to full swing over here in Ibiza, our thoughts are on a little something that we’ve got planned for when the sun won’t be shining so beautifully…

Each year come the end of the summer season, Pukka Up returns to London to throw the biggest Summer Reunion on the planet. After kicking off with a sunset boat party on the River Thames, the party will then move on to Ministry of Sound, one of the capital’s most famed and loved clubs, for the ultimate summer send off.

Right now, tickets are on sale for only £30. The offer will only be in place ‘til this time next week, so grab yours right HERE, right now.

Pukka Up Presents the Love Mobile at Street Parade 2015

The Street Parade is the largest of its kind, with close to one million people attending each year from all across the globe. Taking place in Zurich, Switzerland, it has been compared to Berlin’s famous Love Parade, and is Zurich’s largest annual event.

Pukka Up will be hosting one of these Love Mobiles for the first time ever at one of the largest techno parties in the world, joined by DJs The Beat Rockers, Rockwell Noize, Marko Liv, Levi Blind, and many more.

It's more than just a boat party…

There’s another fantastic line-up for you this weekend from Pukka Up at Static club in Manchester.

This is the night fans have been waiting for as Saturday night brings the one and only Falseface to the floor at one of Manchester’s craziest clubs! Falseface’s live sets have been causing quite a stir in the music industry and are crossing musical genres from electronica to underground house. Supporting the dynamic DJ for this event are Adam Guy, Rob Callaghan, Twinsound and Paul Barno.

There is no doubt that this will be a sell-out event, so you need to snap up those tickets quick! Think Party, Think Pukka Up!

Pukka Up Returns to Mcqueen Shoreditch

So much more than just a boat party…

This August we return to one of our flagship London venues, McQueen in Shoreditch. Over recent years the lounge bar come nightclub has built an unrivalled reputation as one of the capital’s leading venues for fans of house music, located in everyone’s favorite London borough, Shoreditch.

The Steve McQueen theme curated by the venue makes it one of East London’s sexiest and most stylish hangouts, creating impressive visuals of understated macho glamour. The elegant lounge bar is famed as much for its perfectly blended cocktails and beautiful clientele as it is for its reputation for hosting some of house music’s most exclusive parties.

Landing smack bang in the middle of the summer season, this party is a great excuse for Pukka Up revelers to join up and party in style. Whether you’ve just returned from the White Isle, are yet to go, or missing out this summer, this event will give you a perfect taster of Pukka Up’s renowned good – time vibes that are setting dance floors on fire world over.

Displaying some of the best quality feel good house music the capital has to offer will be Pukka Up favorite Jochen Simms. No stranger to the scene, Simms has been a huge part of the Pukka Up family in recent years, and, over the last few has worked with some of the biggest names in dance music.

Not only a talented DJ, as a producer sound systems worldwide aren’t unfamiliar with his sound. His remixes regularly feature in the Top 10 charts both in the UK and the US and have received support from radio stations such as BBC Radio 1, Kiss and Capital who regularly broadcast his tracks across airwaves worldwide. His catalogue of remixes is hugely impressive, having reworked tunes by some of the top names in the house music world.

Joining Pukka Up will be London Sound Academy, who often partner with the worldwide brand on their biggest events within the capital and are London’s most sought after DJ school, showcasing the best of UK talent. These guys are well known for churning out some of electronic music’s most established artists such as AlunaGeorge, and are no strangers to joining forces with the biggest names in clubbing with previous partnerships including Ministry of Sound and Egg London

With advance tickets only £10 there is no excuse not to make your way down to London on the 15th of August for a taste of the Pukka Up summer in one of the capitals most elite dance venues. Buy yours HERE